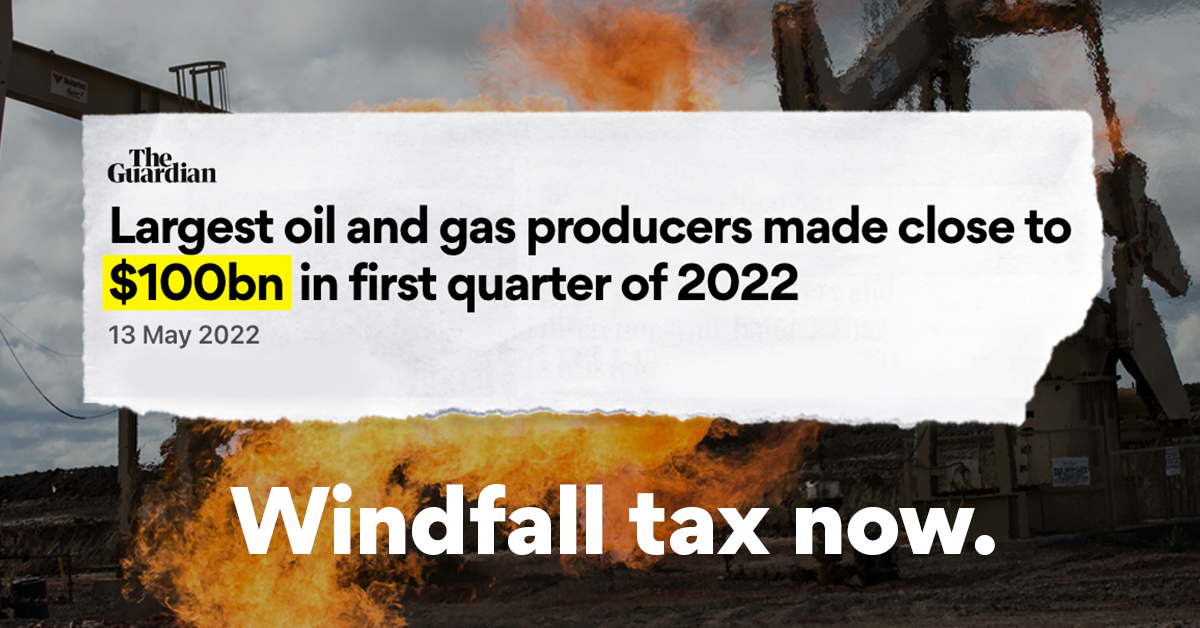 Many of us are dreading our next energy bill. We're looking at our expenses, trying to see where we can cut down costs. Meanwhile, big gas corporations are absolutely raking it in and getting away with not paying their fair share.1

The mega profits gas corporations are experiencing coupled with a rising cost of living crisis is prompting calls from tax experts for the Albanese Government to introduce a windfall tax.

Will you join the call by signing this petition demanding rich corporations pay their fair share?

It's an idea backed by the likes of Dr Ken Henry and The Australia Institute, who argue a one-off tax on the enormous profits gas corporations are enjoying could help alleviate the pressure people are feeling with the rising costs of living.2

Momentum is building. The UK Government recently introduced a windfall tax in response to public pressure and growing concerns around the rising cost of living.3 Just last week the Indian Government did the same, introducing a windfall tax for oil corporations.4

And this week, the Spanish Government used revenue from a windfall tax on banks and energy corporations to fund free train transport for three months, school and university scholarships, and 12,000 new homes – 60% of which will be for social housing.5

Will you sign the petition calling on Treasurer Chalmers to introduce a windfall tax on gas corporations? Together, we can demonstrate there's enough public pressure to make big corporations pay their fair share.
What is a ‘windfall tax’?
A windfall tax is a one-off tax imposed by a government on a corporation. The aim is to target corporations that financially benefited from something they weren't responsible for (e.g. an unepexcted surge in demand for gas, or rising interest rates on loans) redistributing the excess profits for greater social good.

Energy corporations are making larger profits for their oil and gas than they were last year, partly because of reduced capacity of domestic coal-fired power generators and partly because of international supply issues due to Russia's invasion of Ukraine.6

We're in the midst of an energy crisis where gas corporations are raking it in while the rest of us are feeling the pressure of rising energy costs. It makes sense for those corporations to reinvest a portion of their profits back into the community in the form of tax.
How can a windfall tax be enforced when oil and gas corporations don’t even pay the tax they currently owe?
Technically, Australia already has a windfall tax on gas corporations: the Petroleum Resource Rent Tax (PRRT). The PRRT is a tax on profits generated from resources like oil and gas. Unfortunately, the PRRT is riddled with loopholes so big you could drive an oil tanker through them.

One of the biggest problems with the PRRT is how the value of gas is calculated, known as the 'gas transfer pricing mechanism'. With the way the value is currently calculated, Australia is essentially giving away our gas resources to multinational corporations for free. According to Treasury's own estimates, this comes at a cost of $90 billion in lost tax revenue.7

Another major flaw within the PRRT is where profits are taxed after deducting earlier losses. While this is normal for most taxes, these particular losses can be carried forward essentially like a tax credit system, which allows corporations to amass billions of dollars in tax write-offs over years and deduct them from their profits, meaning it'll be a long time before we see them pay any tax.8

These issues could be solved by simple regulatory or legislative changes. However, proposed reforms to fix the PRRT have been at a standstill for years.

Alternatively, a 'windfall tax', which would operate in a similar way, could be introduced in consultation with tax and economic experts who understand how to craft legislation in such a way that corporations won't be able to avoid tax through huge loopholes. To be honest, we don't mind which method the government uses so long as they make big gas corporations pay the tax they owe.
How do corporations avoid paying tax?
While all corporations with a turnover of more than $50 million pay a 30% corporate tax rate (25% for turnovers less than $50m),9 there are a number of ways in which multinational corporations avoid paying tax.

The most commonly used corporate tax avoidance technique is "profit shifting" where multinational corporations shift profits out of the country to one of their subsidiaries in a country with low or no corporate tax – i.e. a tax haven.

For example, up until 2014 tech giant Apple had been exploiting a well known tax loophole known as the "double Irish". This allowed Apple to shift their profits through subsidiaries from the US to Ireland, where that incurred hardly any tax.

However, following tightening of the "double Irish" loophole, the tech company moved its subsidiaries to Jersey as revealed in the 2017 Paradise Papers leak. Apple avoided paying tax in the US by having its Jersey-based subsidiaries hold the rights to intellectual property. The Jersey subsidiary could then sell the rights to its US-based corporation, which would be recorded as a deduction for the US corporation (where corporate tax rates apply) – whereas in Jersey, it would be recorded as income with no tax payable thanks to Jersey's 0% corporate tax rate.10
Why not ask them to pay tax on all their profit, not just unexpected profit?
Great question! The short answer is, we are. Billions of dollars in tax revenue is lost to corporate tax avoidance every year. That's money that should be reinvested in the community to fund health and education services, transport, income support, and housing (just to name a few).

The current corporate tax rate is 30% of profits (less if a corporation's turnover is less than $50 million). However, multinational corporations have been using "creative" accounting for decades to minimise their profits, and in turn, reducing the amount of tax they need to pay.

In 2019-2020, a third of corporations paid no tax.11 While there are valid reasons why a corporation mightn't pay any tax (e.g. they made losses as many small businesses did during the height of COVID), we aren't talking about your local cafe on the corner. Some of these corporations made billions of dollars in income, yet paid no tax – corporations like Chevron and ExxonMobil.

All corporations should pay the tax they owe, and you can be sure we're looking into ways to close some of the many loopholes corporations use to avoid tax.
Where does the Government currently stand?
While the Treasurer has ruled out introducing a windfall tax, Labor talked a big game on tax avoidance in the lead up to the Federal election. If we can demonstrate enough public support for making big gas corporations pay what they owe, it could be enough to make the Treasurer and Albanese Government rethink their stance.
References
[1] Gas tax leaks billions as energy prices soar, Australian Financial Review, 20 June 2022.
[2] Gas export tax would help to fix Australia's energy crisis, says Dr Ken Henry, ABC News, 21 June 2022.
[3] Energy prices: How will the £5bn windfall tax work?, BBC News, 26 May 2022.

We’re in the midst of an energy crisis, with people feeling the stress of rising energy bills – meanwhile gas corporations are making billions of dollars in profit.

It’s high time corporations paid what they owe in tax, which can be reinvested into the community. We call on you to introduce a windfall tax as a matter or urgency, and not let this opportunity pass us by.